It's taken me way too long to get to my second post. but here it finally is. 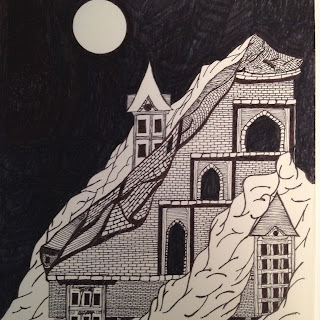 I have several pieces of news regarding some projects that we hope will pan out.

First - there is a plan to publish an anthology of Bob's stories in France.  I have been corresponding with a French publisher who hopes to get a number of stories translated and published in 2016.

Second - we also have been working with an English screenwriter who has bought the rights to one of Bob's stories, which we hope will be made into a movie.
Of course both of these projects will take some time, but we are so happy to see interest continue in these stories.

One project we are sure of is the 15th anniversary edition of Feesters in the Lake,
to be published next year by Centipede Press and edited (again) by Jim Rockhill, who has been a great help to my sister and me.  I will post the publishing date when I know it.

I suppose the best place to start is with the earliest "Vinegar Worm" that I have, Vol.1, #2.  The first fanzine my dad published was called "The American Journal of
Oculenteratoology", which was only one issue.  After that it became "The Vinegar Worm".

"The Vinegar Worm" was published from the various places we lived over the years he
wrote it.  These first were written and printed (on a hand cranked mimeograph machine in our basement, which my sister and I often had the pleasure of turning) in Denver, Colorado.


The Vinegar Worm
(Formerly the American Journal of Oculenteratology)
Vol.1, No.2

OUT OF THE CRUET
If any of you noticed, the previous issue of this irregular publication was entitled "The American Journal of American Oculenteratology.  "Oculenteratology" was an etymologically imperfect coinage of mine, meaning (or intending to mean) "the study of bug-eyed monsters".  This little joke was ill-received in some quarters, and was the occasion, I have gathered, for a number of copies having been thrown away unread - the recipients having been under the impression that it was some sort of crank publicity, on the order of scientology or dianetics.  Furthermore, "The American Journal of Oculenteratology" is an unwieldy kind of title, and takes a long time to type - and to say.

So, "The Journal" passes into history, after a brief  but uneventful life, and its place is taken by THE VINEGAR WORM.  The vinegar worm is an ugly small creature that lives in an acid environment; it absorbs acid with relish, and secretes acid constantly.  THE VINEGAR WORM's title stands as its policy statement.

*
You must admit that THE VINEGAR WORM is nothing if not solicitous of the readers' wishes; this issue has been tailored according to the specifications outlined in your cards and letters. ("This is your magazine!") You asked for fiction; below is Fred Haggard's "A Game of Jacks".  You asked for poetry; there are three poems in this issue.  A few tasteless clotpolls made the suggestion that I simply discontinue publication, as a public service, but I treat them with the lofty disdain they deserve.

A small number have asked for a letter column.  I find this a bit puzzling - I've never cared to read other people's mail myself - but if you want it, you'll get it.  Space limitations preclude an extensive letter department in this issue, but just so no one will feel slighted, I set out below two letters I received last week.  (I know you wouldn't be interested in old letters.)
Dear Bob,  Autumn has come to Illinois, and the maples were never more
beautiful,  Your Uncle Herbert and I have been taking long walks, just
soaking up all that beauty - and Pepper scampers along with us, making
many a side-trip in pursuit of squirrels.
Herbert's arthritis is much improved, thanks to Dr. Veblen.  I, however, have
been unable to obtain relief from ny asthma.  I understand the winters are
very cold in the mountains, so don't neglect to wear your muffler on bitter
days.
Love,
Aunt Martha

Dear Sir:   Thank you for your letter of December 12.  We regret that we are
unable to refund your money, but the damage was clearly caused by your
mishandling of the apparatus.  We trust that we will not hear from you
further in this connection.
Yours very truly,
The Atlas Products Corporation

Well, so much for letters.

Posted by Unknown at 6:02 PM No comments:

Welcome to The Vingar Worm Redux 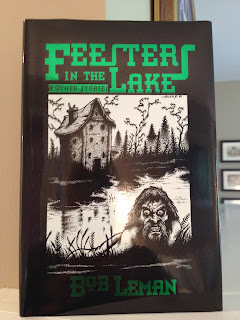 This is the first installment of The Vinegar Worm Redux.  My goal is to share the writing of my father, Bob Leman.  Whenever I Google "Bob Leman" I find postings from folks asking about his stories, so I know there is at least some small interest out there.  I did inherit some qualities from my dad, but writing wasn't one of them. Therefore, I will mostly fill this site with his words, not mine.

My father's fanzine was called The Vinegar Worm and I am lucky enough to have copies of all of them.  I believe he had a short lived zine prior to that, but I do not have those (if anyone has any copies please let me know).  I plan to post each issue in its entirety, but not all at once. 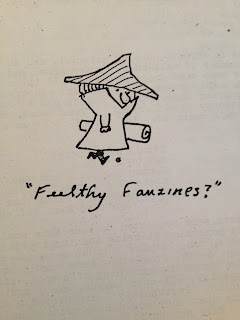 I will also include some of his doodles, cartoons and puns.  We came across a variety of his meanderings as well as an unfinished novel.  I'll include what I can.

I'm hoping there will be some response.  I hope you will forgive my poor typing skills and be patient, as it will take me some time to get each post put together.